How to grow good pumpkins

This year I have grown the best pumpkins. They are big, they are healthy and there is an abundance of them. This is an improvement on any other year for pumpkin produce because this year I actually applied some skills and methods that I’ve not applied before. We have a supply of pumpkins for the winter (tick) and I have grown too, along with these gorgeous pumpkins (tick). Welcome a new master, the teacher, Pumpkin!

Previously I have applied a rather hit and miss approach to pumpkin growing, fuelled I think by a comment my father once made about how when he was growing up they ‘grew like mad, practically weeds’. He grew up in a much warmer climate on a dairy farm where they no doubt were regularly soaked in both cow manure and water whilst growing in red volcanic soil. These growing conditions did not come to mind for me, instead, I considered that pumpkins must be the hardiest plant on the planet to grow and as such could pretty much fend for themselves. I have been wrong.

Last year I decided that I was going to grow an abundance of good pumpkins and I was going to apply myself to the task. No more hit and miss for me.
The first thing I needed to do was to prepare the soil, here at Nala Pakana this actually means make the soil. Pumpkins need heaps of room and so we dug out a large circular shaped area in the spot my landscaping friend had designated for such a purpose in a plan she drew for us a few years back.

We then collected up some wood (of which we have mountains of) and set it alight. It was a huge fire and when it was burning well, lots of coals, we put it out. Then we covered it in quite a bit of freshly collected seaweed, several inches thick. We combined the coals (well and truly out for about a week) with the seaweed. In short we had made our own slow release bio-char.  Onto this we emptied well-rotted humanure soil from our clivus multrum composting toilet. We also added lots of good soil and mixed everything up. Then, a very thick layer of garden mulch hay was added. Nothing to do now other than keep it watered and that is what I did.

I cared for that pumpkin soil religiously, ensuring it was well watered. When the soil looked as if it had broken down and now that autumn was upon us I sowed seeds for a green manure crop of barrel medic, broad beans, sub clover, white clover and red clover. The rains began and the seeds grew and the space filled with green. When the green manures started to flower I went out and dug them all in, well, until everything was well combined… green manure, soil and hay. I waited until the perfect time of November and planted into our pumpkin patch a selection seedlings I had grown from seed myself in our little cold frame made from old windows placed quite near to the front door for easy care of seedlings. 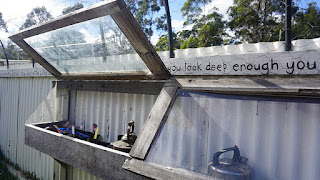 Yes, we now have enough delicious organic and grown with love pumpkins for the winter time but that is not the best of what we have gained. I have learned to make my own bio-char and I have further developed the ever useful skill of patience along with the also ever useful tool of diligence. I am at the moment working on a garden area for the Devas because my hand in hand relationship of gardening with their faery energy has grown stronger.  Our little daughter will love this spot and at it we will converse with the elementals and offer them gifts. I have also applied myself to making the best sourdough bread and a brilliant compost that is ready to use in just a couple of weeks, both of which would not work with a hit and miss approach. 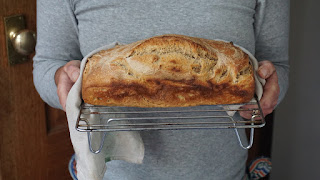 I look at our pumpkins and I am filled not only with a sense of happiness, but also a sense of achievement because I get to eat pumpkins, I met my goal of growing plenty for this winter and I know I apply the hit and miss approach far less in all areas of my life.
It took planning to grow these wonderful pumpkins and it took dedication and both were worth it. Do not apply a hit and miss approach to anything in your life if you want good results. Be it meditation, changing your diet, growing pumpkins… apply a hit and hit the target approach! 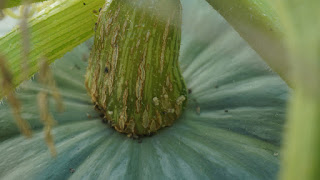 Harvest your pumpkins when the stalks begin to look like this, when the leaves die back, when you tap on them and the seed cavity is formed and the tap gives off a hollow sound. 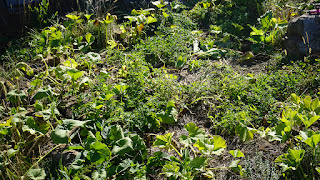